New, unfamiliar colour combinations are especially good at boosting interest in lily cultivation. That was the conclusion of the 14 companies who opened their doors during the Dutch Lily Days. From Tuesday to Friday, June 5 - 8, the seventh edition of the international lily event is being held. Once again, hundreds of varieties will be waiting for the visitors, ranging from newcomers and popular bestsellers to ‘golden oldies’.

Consumers and the trade are primarily searching for new colour combinations in lily cultivation. In particular, two- and three-toned varieties are assured of a sunny future, according to the participating companies in the Dutch Lily Days. The rise of double Orientals and pollen-free varieties will continue in the coming year. With the globalisation of the lily trade, the practical aspects of the flower are becoming an increasingly important issue: lilies are being transported over longer and longer distances and must not lose their decorative value or longevity. 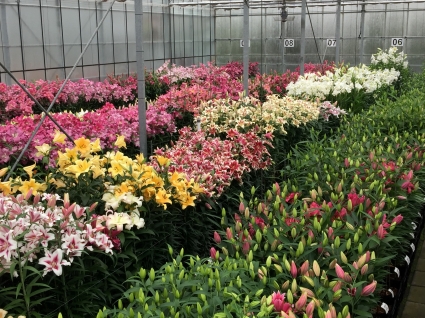 Zabo Plant is this year's host for the official opening of the four-day event. During the seventh Dutch Lily Days, the complete trade assortment is flowering and on display for visitors. This includes talented newcomers like the Roselily, and the Regalo, one of the oldest commercial varieties.

In 2018 the open days will again be held a week before the Flower Trials. This is an important stimulus for foreign visitors especially to start their trip to the Netherlands a week early or extend it.